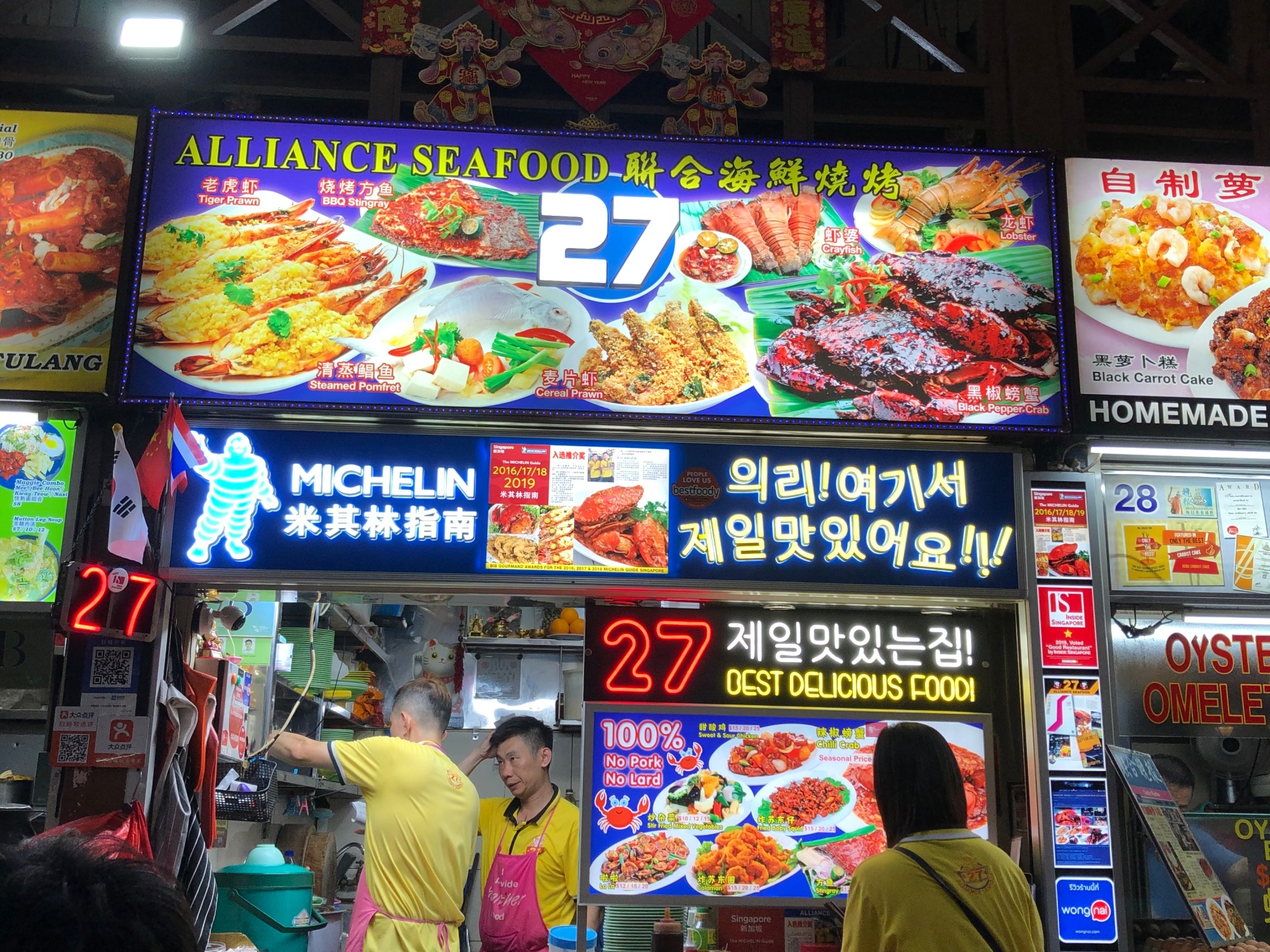 Crazy Rich Asians, wouldn’t we all like to be like them. Well, for an hour, I got to be like them. Especially what food they ate. No, not the fancy Michelin restaurants but the delicious street food at the Newton Food Centre.

Probably the most well-known food in the Newton Food Centre is the Chili Crab. On top of that, I had at maybe the most well-known hawker stand in the world, Alliance Seafood. Surprisingly I have never had a fresh whole crab similar to what they do in Singapore or China but what a great introduction. The crab was incredibly fresh and had that light flavor of the sea with a chewy but not tough texture. On top of that was the chili sauce. The sauce itself was rich and dense with complemented the light texture of the crab and the flavor was a tiny bit spicy and had an undertone of tomato.

One of the more underappreciated wonders of Singaporean Cuisine was the satay. Chicken Satay is a dish commonly replicated in America. Here the texture of the meat is more similar to a chicken teriyaki dish. In Singapore, the texture was extremely tender whole also having some structure and not falling apart. To add flavor, the satay I tried had a sweet glaze (maybe soy sauce and honey) which also made it look shiny and delectable. Finally, the sauce was a classic peanut sauce with a difference in the texture. Instead of making a paste with peanuts, the sauce had a paste but also minced peanuts for a crunchy texture.

Fried rice is a common dish to Singapore but never the less, it was still perfectly done. The rice was cooked perfectly, not too hard or not too soft, a mistake many restaurants make. The rice was beautifully incorporated with the flavors of the vegetables and fresh shrimp. Everything about the dish was great and with a combination of the chili sauce from the crab, it was surprisingly one of the best bites of the trip.

Kai Lan is a leafy Chinese broccoli with tender green leaves and a thick crunchy stem. The dish we were presented had just the leaves, with a rich oyster sauce and a tiny bit of fried onions. The kai lan leaves were perfectly sauteed. The texture was like a tender green that resembled a mix of spinach and bok choi. The flavor of the dish mainly came from the oyster sauce and the saltiness of the fried onions. These flavors did not overpower the Kai Lan but elevated it.

One thought on “A Taste of Singapore: Dinner”

This is a text widget. The Text Widget allows you to add text or HTML to your sidebar. You can use a text widget to display text, links, images, HTML, or a combination of these. Edit them in the Widget section of the Customizer.
Loading Comments...
%d bloggers like this: